Science Reveals The Cannabis Industry’s Greatest Lie: You’re Buying Weed Wrong (And So Is Everyone Else)

There’s much more to cannabis than THC—for solid proof, look no further than the CBD boom—but when it comes to moving product on the legal recreational market, only two numbers matter: the list price, and the THC content.

When cannabis tests at more than 25 percent THC, dispensaries can justify charging $75 or more for a store-bought eighth—because there’s a very good chance people will pay it, confident that they’re taking home the best and most potent weed available. If the weed’s in the teens, well, it had better be cheap.

The problem is that this is all wrong. All of it.

THC shopping is almost as bad and dumb as buying wine based on how cool the label looks (which is also how some people buy weed).

Not only does THC content have nothing to do with how “good” the weed is, as recent research conducted by the University of Colorado and published in JAMA Psychiatry found, THC content is also a poor indicator of potency.

High-THC weed doesn’t even get you “more high”!

Researchers at the University of Colorado at Boulder’s Institute of Cognitive Science documented the experiences of 121 cannabis users. Half the study participants were users of cannabis concentrates—very-high THC cannabis extracts—and the other half preferred cannabis flower.

Both groups received cannabis at varying “strengths”: flower users tried cannabis flower at either 16 percent or 24 percent THC, and extract users received oil at either 70 percent or 90 percent THC. Researchers checked study participants’ blood and monitored their mood, cognitive function, and intoxication level before, immediately after, and one hour after use.

As the researchers expected, the concentrate users had very high levels of THC in their bodies after use. But they weren’t “more high.”

In fact, every participants’ self-reported “highness” was about the same—“as were their measures of balance and cognitive impairment,” as CU noted in a news release. Medium THC flower, high-THC flower—all the same high! This was not what the researchers were expecting.

“People in the high concentration group were much less compromised than we thought they would be,” said coauthor Kent Hutchinson, a professor of psychology who studies addiction, in a CU news release. “If we gave people that high a concentration of alcohol it would have been a different story.”

The short answer is a theory that cannabis connoisseurs and cannabis scientists have been saying for years: There are many more factors at play than THC. Put slightly longer: Judging a cannabis strain on its THC content is not unlike judging a film based on the lead actor. The THC number isn’t going to be an indicator of the performance.

(One very large exception to this: edibles. If one edible says it has 100 milligrams of THC, and another says it has 10 milligrams, and you eat the 100, you will absolutely be higher, longer, than if you ate the 10.)

There are a host of cannabinoids, including CBD as well as more than 100 others—most of which aren’t even tested for. (Even if they were, would the average buyer know what to do?)

There are also aromatic compounds called terpenes that dictate how cannabis affects the mind and body. All of these work in concert, a phenomenon known as “the entourage effect.” This is why synthetic THC simply didn’t have the same medical effects as smoking weed.

A good way—maybe the best way—to determine if cannabis will be good, or at least good for you, is to smell it. But in legal markets like California, that’s now impossible. Pot is sold in prepackaged containers. And the coronavirus pandemic eliminated what limited opportunities there were to smell cannabis. Some shops let you wave under your nose a designated “smell jar”—a few buds in a container with a perforated lid. No longer.

But back to THC numbers. Cannabis researchers know it’s not an indicator. Cannabis growers and sellers know it’s bogus. And yet, here we are. The market simply hasn’t caught on—and merchants, by putting high-THC cannabis out on the shelves to satisfy the misdirected market demand, are ensuring that the misunderstanding continues.

“It’s a shame,” said Neil Dellacava, the co-founder of Gold Seal, a San Francisco-based cannabis brand that specializes in high-end flower. “I find stuff that’s absolutely amazing that I have to throw in the trash because it tests at 18 or 19 percent.”

At that level, despite “an amazing terpene profile, the best smoke I’ve ever had” simply will not sell, he said.

The THC fallacy persists despite everyone’s best efforts. Both Instagram influencers as well as cannabis entrepreneurs and advocates have tried to explain that the THC number is, at best, a rough estimate (and a number that, depending on the lab that came up with it, might be inflated or suspect).

With this much momentum, it’s unlikely science will change anything. It will take a long time for buyers to adjust their habits and realize THC content isn’t like alcohol by volume on a beer label after all. Until they do, connoisseurs can take advantage of the market inefficiency, and take home superior pot with lower THC levels at a reduced price. It will just require a little more work on the consumer’s end.

But it will also require cultivators of lower THC, higher-high weed to have demand high enough to keep them in business, and that’s far from guaranteed. 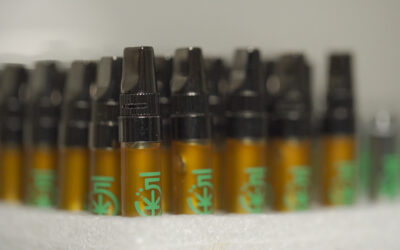